When your students enter the Paleo game, they are represented by a prehistoric man or woman avatar that exists in a prehistoric world of dinosaurs and falling objects. They need to move their character left and right to collect the falling objects that answer the math problems or cognitive tasks that the teacher has designed for them. They face various types of stimuli: numbers, food types, bombs, bottles with liquid related to stamina (lives of the character) and to resistance to bombs. These are presented randomly to make the game challenging and fun.

You can customize the settings to individualize the challenge to the student’s level and ability by choosing among several levels of difficulty with regards to the speed of the falling objects or bombs that are being dropped by flying dragons which need to be avoided. The hungry dinosaurs also move towards the prehistoric man or woman.

Your students will need to make coordinated movements to avoid dinosaurs and falling bombs. They should respond only to the correct falling objects (go stimuli), and to inhibit their responses to bombs or unrelated objects (no-go stimuli). Thus, this game strengthens children’s cognitive ability of response inhibition and improves their executive function attention and reasoning ability. Reasoning ability heavily depends on inhibitory control, i.e., blocking information irrelevant to the target and ignoring irrelevant environmental distractions.

You choose the learning goal of this game, for example, gathering specific numbers of food types or multiples of specific numbers as practice with prime numbers. You decide whether the game will be played with lives or not, thus adjusting the level of challenge for each child. An attack by a dinosaur or a bomb hit reduces the stamina and eventually causes the loss of a game life.

Ready to enter into a prehistoric world? Be careful to collect the correct dropping objects and avoid bombs or dinosaurs!

I CAN understand that there are sounds when I choose an item.

I CAN select the “Play” button with my left hand.

Time to remain stable to select an item.

I CAN select the “Play” button, keeping my hand stable for 3 seconds.

Time available to complete the game. Disable if the student feels pressure.

Teachers can select the character/avatar, which the student will control.

I CAN control the movements of the prehistoric man in the game with my own body movements.

I CAN read the game instructions in Spanish.

The option of “Game Difficulty” sets the complexity of the stage and makes the game more challenging by changing the speed of the falling items. When bombs and/or dinosaurs are enabled, game difficulty option affects their display speed as well.

Adjust the game difficulty according to the need of the child.

I CAN win at a game in a hard level that demands good visual perception, full body movement control and good response to visual instructions.

“Game lives” option is depicted by the stamina bar at the left corner at the bottom of the screen.

I CAN notice that I lose stamina each time I select a wrong item or I am hit.

I CAN play the game with game lives (stamina).

I CAN have better full body movement control when collecting items and avoiding flying hits.

I CAN avoid the collision with dinosaurs.

This shows how many items the students have to collect per game.

I CAN collect 15 bananas.

This shows the different types of objects falling from the sky increasing the level of game difficulty.

I CAN collect a specified number of the same item.

Choose the type of exercise that the child is called to practice.

I CAN collect multiples of 6.

These items can be changed according to the teacher’s preference and children’s needs for practising with items or math concepts (prime, composite numbers or multiples).

I CAN collect 20 vegetables.

I CAN collect 15 prime numbers. 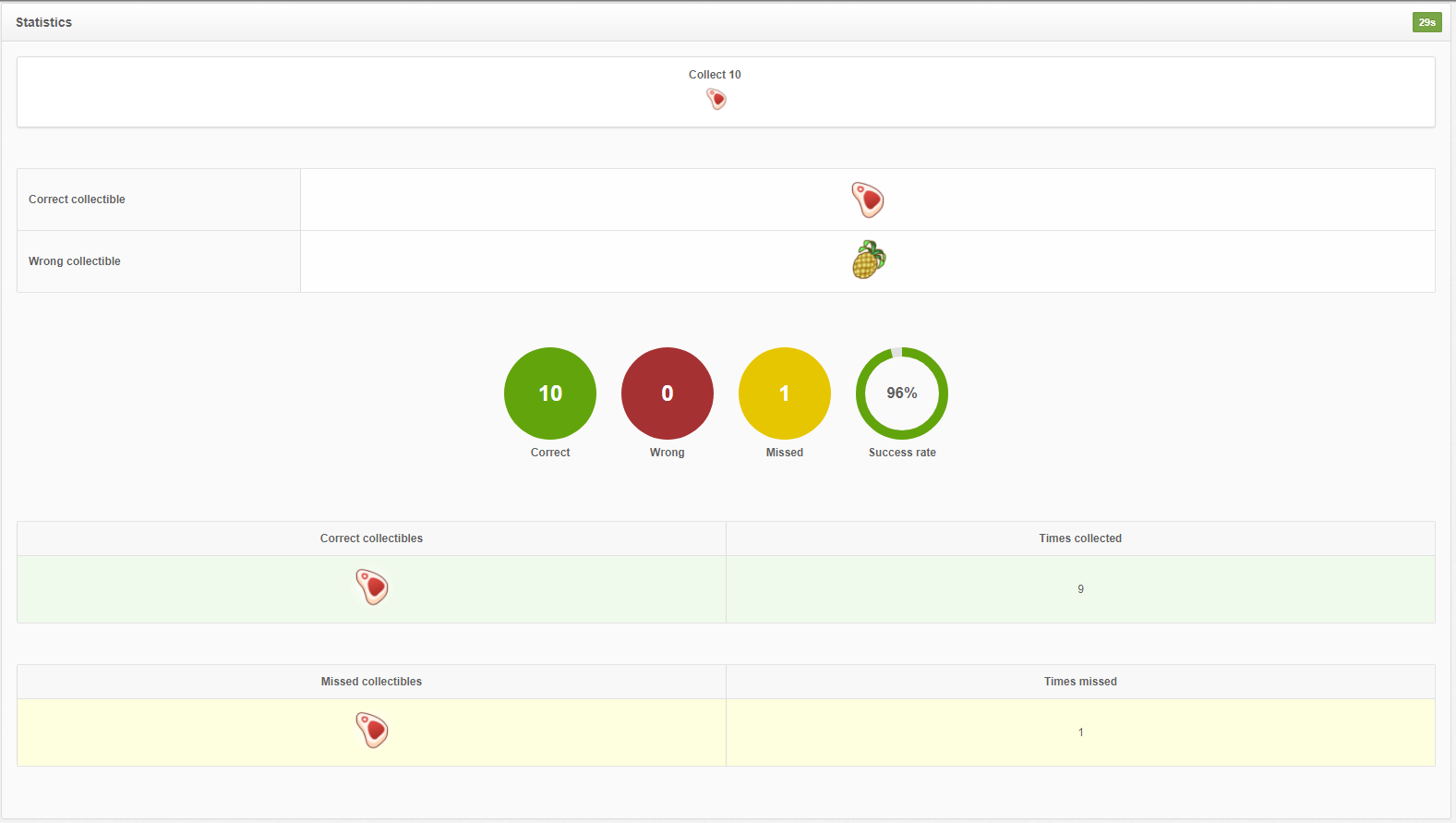 This shows statistics on the number of correct items that a child collected, the wrong items, the missed ones and the success rate.

Also we can see the amount of time the student spent on the game, the correct and the wrong items as well as depicts the times each item was correctly or wrongly collected.